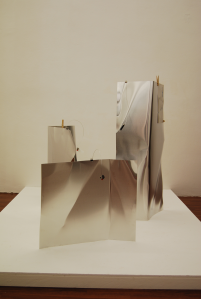 I am living all over you explores the boundary between life and representations of lifestyle. “Lifestyle” is a sociological concept describing a set of attitudes and behaviors that forge a sense of self. These behaviors include the creation — and consumption — of cultural symbols that resonate with signifiers of personal identity. In other words, rather than a spontaneous expression of the qualities that define an individual, lifestyle is the performance of a highly constructed set of cultural codes, including mannerisms, mores, modes of dress and hygiene, personal possessions, behavior in interpersonal relationships, choice of profession, domestic habits and more.

As such, the creation of lifestyle can be considered an overarching aesthetic mission, one that is increasingly tied to the commercial sector. The marketing strategy of “lifestyle branding,” for instance, seeks to develop a long-lasting emotional connection with consumers through the successful sale of not only a product or service, but rather the fantasy of a specific identity, image or status. Promoting abstract qualities such as luxury, trendiness or subversiveness, lifestyle branding seeks to align the purchase of products with “the good life.” The former German slogan of furniture manufacturer IKEA,

lays this ideology bare in a clever way. In English, this phrase roughly translates to “Are you just residing, or are you already living?” The slogan’s logic turns around the collapse of meaning between “life” (leben) and “lifestyle” (in German, der Lebensstil). For English speakers, the verb “to live,” of course, already has the double meaning of residing in a property and existing as a conscious being. In German, however, the different verbs “wohnen” and “leben” are contrasted to suggest that in a home furnished by IKEA, one lives a more satisfying domestic lifestyle than someone who simply resides in a dwelling. 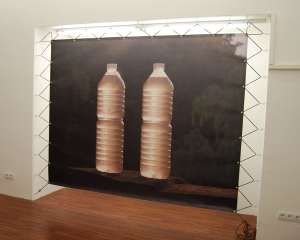 As Adam Curtis’s brilliant 2002 BBC documentary The Century of the Self attests, lifestyle branding evolves from the psychology of marketing that developed in the capitalist West from the early twentieth century. Curtis plots the strategic alliances between Freudian psychoanalysts, corporations and governments that led to the birth of public relations and modern advertising techniques. These collaborators applied cutting-edge psychological knowledge to manipulate the behavior of consumers on a mass level. By distrusting the rational spirit of mankind and appealing to humanity’s primal drives, Curtis says that corporations and governments worked together to “engineer a society of control.” This control was enacted through fostering desire for ever-obsolescent and frivolous consumer products. Paul Mazer, a Wall Street banker speaking during the height of the Great Depression in the 1930s, states the goals of early capitalism clearly:

“We must shift America from a needs to a desires culture […] People must be trained to desire, to want new things, even before the old have been entirely consumed.”

This insidious yet plainspoken mission statement has become a reality of contemporary Western life. Products strive to symbolically meld themselves with life in its most ineffable form. Life can always be bought and consumed, and can always be updated and improved. Such is the logic of contemporary global capitalism. In this sense, marketing performs the biopolitical. Defined by writers such as Michel Foucault and Michael Hardt and Antoni Negri, biopolitics refers to the scientific and governmental technologies that regulate and monitor the lifespan itself. From surveillance to schedules to advances in medicine, life is assigned meaning beyond pure, organic duration. These meanings can include gender, ethnic and class identifications. In that sense, each living being becomes a political tool. 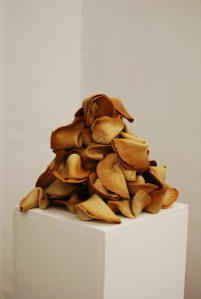 Fine art has also entered the realm of the biopolitical, but through different means: the merging of art and life. As design and marketing campaigns work through ever more sophisticated means to commodify the reigning aesthetic of the moment, much art of the last 60 years has shied away from such predetermined aesthetic decision-making. In practices as diverse as performance, temporary installation, discursive workshops, process-based art and conceptual art, what is shown in a gallery context is not art itself but art documentation. As Boris Groys states in his aptly titled 2002 Documenta 11 catalogue essay, “Art in the Age of Biopolitics: From Artwork to Art Documentation”:

“Art becomes a life form, whereas the artwork [in the gallery setting] becomes non-art, a mere documentation of this life form. One could also say that art becomes biopolitical, because it begins to use artistic means to produce and document life as a pure activity […] One is again confronted with the question of the relationship between art and life – and indeed in a completely new context, defined by the aspiration of today’s art to become life itself, not merely to depict life or to offer it art products.”

I am living all over you connotes a perverse biopolitics in regard to the idea of art as life. The artworks in the exhibition, while discrete objects and not simply documentation, break with the traditional definition of fine art of “representation.” They refer to life outside themselves, and comment on the artificially drawn line between fine art and commercial design.

The title itself, a reversal of the title of 1987 American indie rock band Dinosaur Jr.’s album You’re Living All Over Me, suggests a sexy reclamation of the means of biopolitical control. The words sound much like an advertising slogan. At the same time, there is an ambiguous sense of the abject bubbling under the surface.

As a shout to the open landscape, I am living all over you implies the colonization or cultivation of land. As a lover’s whisper, it might stand in for the most intimate of acts (“I am coming all over you”). From the defiant and boldly painted lips of a drag queen, it could assert one’s intention to live against convention. Uttered by one of the hysterical patients photographed at Salpêtrières — prisoners, casualties and posterchildren of domestic control and aberrant female sexuality — it could be an orgasmic exclamation. Functioning somewhere between concept advertisement, manifesto title and pop lyric, I am living all over you provides our point of departure for criticism, semiotic musings, flights of fancy and indulgence. PRESS RELEASE – I am living all over you
Claudia del Fierro, George Henry Longly, Hanna Schwarz
Curated by Wendy Vogel

The works in I am living all over you explore the boundary between life and representations of lifestyles. “Lifestyle” is a sociological concept describing a set of attitudes and behaviors that forge a sense of self. These behaviors include the creation — and consumption — of cultural symbols that resonate with personal identity. As such, the creation of “lifestyle” products can be considered both an aesthetic and commercial mission.

The exhibition I am living all over you considers the permeability between the commercial and fine-art realms. The title, a reversal of Dinosaur Jr’s 1987 album title You Are Living All Over Me, mimics the language of hospitality or home design advertisements. The artists have created work with this title in mind, as well as Laden No. 5’s location in the shopping district of the Römerstrasse.

Claudia del Fierro shows two new works, Wurmloch and Sie werden immer von Komfort umgeben sein. The wormhole is a concept in physics describing a “shortcut” between two different points in time and space. It is represented visually by a double-edged funnel with two swirling openings. Wurmloch, an installation with a swirling round video projection of the entrance of Lidl supermarket against a mirrored backdrop, transports the viewer from the chic area of the Römerstraße to the less glamorous environment of a discount grocery chain while imperfectly reflecting his image. The sculpture Sie werden immer von Komfort umgeben seininvites viewers to create their own fortunes for oversized, handmade fortune cookies. The cookies’ body-like forms deviate from the prepackaged, easy-to-consume versions at Chinese restaurants.

George Henry Longly contributes Two nodes: visual identity for an exhibition design and visual display mechanisms expo. The installation is comprised of a commercially printed banner depicting two bottles bathed in heavenly light, filled with water from the health-giving springs at Bad Ems. While this looks like an advertisement for water, it is absent of the signifiers of marketing: there is no slogan, no identifiable landscape, and no logo on the bottles. The title refers to the work as a “visual identity,” or logo, for an exhibition of support structures for displaying artwork and information — apparatuses that usually remain discreet or hidden from view. The banner thus destabilizes the function of the image. We are not clear whether it is an abstraction of a larger concept, a commercial advertisement or sculpture itself. It leaves the boundary between portraiture, design and commercial products open to interpretation.

A collaborative work entitled Jungbrunnen displays a collection of found and purchased bottles containing water from the springs at Bad Ems. The water sculpture suggests the curious conflation of youth and timelessness. The Fountain of Youth myth has been reappropriated by different cultures from the ancient Greeks to Ponce de León to modern beauty culture. Like modern beauty potions promising endless youth, Emser Wasser, a natural and publicly available resource, also becomes commodified and aestheticized for its health-giving properties.